And they all came tumbling down! 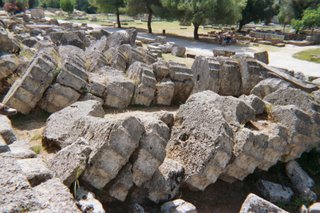 This is a picture of the tumbled columns from the Temple of Zeus in Olympia, Greece. It was taken by a student (Kimberly A.) on our trip in 2004.

Did you ever wonder... What would the ancient Greeks and Romans think about our preservation and veneration of their ruins? Would they laugh? Would they be surprised? Would they be disappointed?
Posted by Mark A. Keith at 10:19 PM 1 comment:

I have given summer assignments this year for the very first time. I have done so with hesitation and still feel very uncomfortable about the whole thing. These assignments are for my 2006-2007 Advanced Placement Vergil students only.

I have long believed that holidays were time away from work and school and have always given all my students the assignment of putting their books in their lockers until school was back in session.

Now I have given in to gentle pressure and expectations that summer assignments are a good and necessary thing. I was quite surprised when, at the end of the last AP Vergil course in 2005, my students suggested that they would have been happier and had an easier go of the AP Vergil course if they were already well-acquainted with the Aeneid before they began translating and critiquing it. They were actually disappointed that they had not received a summer assignment!

So what I have done? I collected the e-mail addresses of all my AP students so that we could remain in contact. I gave them each a copy of a Mandelbaum's translation of Vergil's Aeneid and told them that they needed to read the entire work, including the introduction and notes in the back. I then randomly assigned one of the books of the Aeneid to each student (I have 23 students so there is some overlap) and had them generate an outline of that book. They need to send that outline to me by August 1 and I will collate them all into a larger outline which I will return to them before the start of school on August 23. I have also posted a list of terms about content and background from the Aeneid which they will need to know for their major content test soon after school begins! Furthermore, each student will need to write a general essay on the life and times of the poet Vergil and turn it in on the first day of school! Ack!

My biggest concern at this point revolves around the realm of "What if...". What if the student does not meet the August 1 deadline? What if they don't do the essay? What if they do not read the Aeneid over the summer? Does that mean they start out at the beginning of the year with a zero or two and already far behind? We shall see...

All of this reflects the prevailing attitude of students toward AP classes and the work required in them. I must admit that I am not a fan of AP classes and would not be terribly disappointed if they were outlawed and ceased to exist. Imagine how surprised (and a little disturbed) I was when, several years ago, I asked my advanced Latin students if they would be disappointed if there was no AP Latin. They said that they wouldn't be... they would just take some other AP class instead!
Posted by Mark A. Keith at 6:13 PM No comments:

The Colosseum in Profile 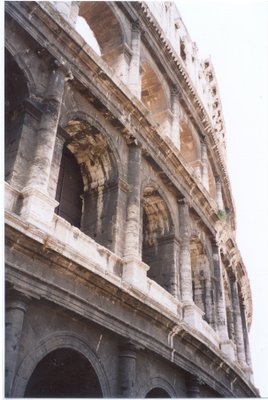 The Flavian Amphitheater, looking good after a decent scrubbing, in July 2001. The first time or two I saw the Colosseum (early to middle 1980's), it was much dirtier and covered with layers of soot. It has been interesting watching Rome get cleaner and greener these past twenty-four years.
Posted by Mark A. Keith at 9:39 PM No comments:

My wife is a librarian and this makes for a dangerous combination for a marriage (an embarrassing and hopelessly out of touch combo, if you ask our thirteen-year-old daughter).

Anyhow, my wife brought to my attention a wonderful book: The Philosopher's Kitchen: Recipes from Ancient Greece and Rome for the Modern Cook by Francine Segan (Random House, Inc., 2004). This cookbook contains recipes (I believe) students would actually eat. There is no talk of lark tongues, sow's bladders, or peacock brains (which, unfortunately, most students then choose to remember and confirm the general public's views of "typical" Roman food which always ends up in the "vomitorium") but reasonable and realistic items. Even more impressive, many recipes have photographs of the final product, making them look very tempting and enjoyable.

The table of contents lists:

This book is a must-have for any teacher who makes food a part of the classroom experience or anyone who loves to cook!

Also tempting... the author has penned Shakespeare's Kitchen. Now I have to find that one too!

*The fine print: I have no connection with Francine Segan or Random House Books. This is not a spam promotion. I merely found this delightful book and wanted to share the excitement.