I am starting an occasional series titled Imagine That, in which I imagine how things would have been in the ancient Roman world. I welcome all serious contributors!

Imagine that you are walking down a street in ancient Rome. What kind of natural and man-made litter, garbage, etc. do you see in and along the road?

Wrapping It All Up: Translating Into Latin

At this year's American Classical League Institute in Minneapolis, I attended a session on the Cambridge Latin Course. Having taught for years from the Ecce Romani series, I was well aware of the reading approach to learning (and teaching) language, but I was very surprised to hear the speaker make the emphatic statement that the Cambridge series is not designed to teach the student to translate into Latin, only to read Latin as quickly as possible.

I can think of no better way to review all aspects of learning Latin, vocabulary, grammar, than by having the students translate into the language. To me, a parallel example would be to have a math student solve a word problem by applying all he has learned in map. Moreover, translating into Latin also allows the student to add creativity and test the effects of emphasis and logic by word choice and word order.

Translating into Latin should be handled in two different ways. The first exercise is to have the student take a set English sentence and then turning that sentence into something a Roman would understand. There is a limited range of expected vocabulary and constructions to be used and useful comparisons can be made between examples. The second exercise, and this one is more important, is to have the student generate an original sentence in Latin. The freedom of vocabulary and constructions allows the student to work at his or her own comfort level and in a way that promotes interest.

Different exercises allowing for original writing can include displaying a picture and having the student describe what is happening. This approach lends some focus as the student should limit vocabulkary choice to the subject matter of the picture. Another activity, completely wide open, is to have the student create a comic strip in Latin. Create a handout with four, six, or even eight blocks, and the have the student create whatever comes to mind. The results can be fun, amusing, and sometimes a little strange. This is also a great opportunity for artistic expression, and don't let the student fret if she thinks she cannot draw, tell her that stick figures are certainly acceptable!

The one thing to remember about translating into Latin, particularly if the student is generating something original, is the rule that simple is always best.
Posted by Mark A. Keith at 10:03 AM 1 comment: 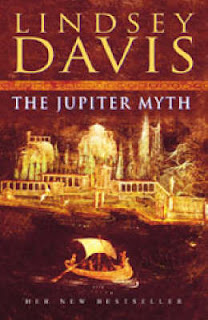 I finished reading Lindsey Davis' The Jupiter Myth this morning. I began re-reading this series in March and have completed the ﻿fourteenth novel; there are six more to go. I have enjoyed reading these books in (relatively) quick succession, but it provides a continuity and context not available when having to wait a year or more between publications. I would always anticipate the release dates for the next installment and must admit that I often ordered the books from Amazon.co.uk. I do remember making this confession to Ginny Lindzey, Lindey Davis' outstanding webmistress, who berated me for not supporting the American market for publication. Alas, I was weak and hooked and could not delay my gratification by reading more about Rome's favorite informer.
By reading these novels together, I am pleased by how they seem to flow together, continuing threads and story lines developed earlier. I don't think I noticed this as much the first go around, and I still appreciate the little reminders Davis faithfully includes about important characters and events.

I am amazed at how well Davis has developed her lead character, Marcus Didius Falco. We are introduced to his charmingly cynical attitude early on, as well as his feelings, relationships, fears, and hopes. He is attractive to the reader and believable as a character. I also appreciate the author's images and descriptions of Vespasian's Rome and Empire. It is obvious that Davis has done her research and labors to include it within the texts without being pedantic or intrusive. I particularly liked her descriptions, and Falco's feelings, about early Londinium, and I was picturing her smirking as she was revealing to her own countrymen and the world her images of the origins of London.

I do think that many of these stories are particularly suited for the big screen or even a television series. Perhaps one day we will see Falco & Partner(s) in action! 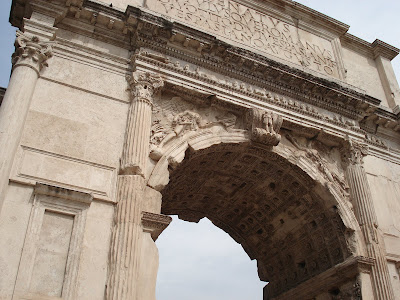 One of my favorite sites in the Roman Forum. I remember giving an oral report on this monument when I was a student at the Intercollegiate Center for Classical Studies in Rome in the Fall 1985. This photograph was taken by my daughter in July 2007.
Posted by Mark A. Keith at 11:26 AM No comments: