I have just finished reading Nemesis, the latest installment of Lindsey Davis' 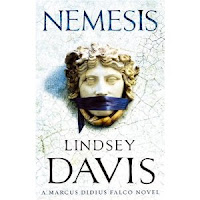 series of novels dedicated to the exploits of Marcus Didius Falco, an informant-for-hire who solves mysteries from the seedier side of Rome during the reign of the Emperor Vespasian. I began reading this series, now up to an impressive twenty volumes, quite a while ago and impatiently wait for the publication of the next story. So impatient is my wait that I typically order the book from Amazon.co.uk where they are released a couple months before being available in the United States. There is an outstanding website dedicated to Davis and her works, well worth a visit for anyone interested in this entertaining series.

Soon after I began reading Lindsey Davis, I discovered Steven Saylor and his books dedicated to Gordianus the Finder in his Roma Sub Rosa series. He, too, has been quite prolific in producing twelve volumes, as well as the clever tome Roma, which recounts a huge sweep of Roman history, and soon to be joined by its follow-up volume Empire to be released at the end of August 2010. I can hardly wait.

In keeping with the genre of sleuthing in an ancient Roman setting, quite by accident I tumbled upon Ruth Downie and her three works featuring Gaius Petrius Ruso, a doctor assigned to the Roman legion in Britain, who becomes a reluctant investigator of murders on the island as the Romans seek to gain control of the province. These stories are well-written and have captured by attention and imagination. I await her next release as well.

Who would have thought that books set in an ancient Roman setting and featuring charming, down-to-earth, believable investigators of murder would be so appealing? I am thrilled that there is a market for this genre so that these authors continue to create the ancient Roman world in their version. It is exciting to read stories set in Rome and elsewhere around the empire where I can say, "I've been there! I've seen that!" or "Is that really what they envision that site tyo look like?"

What I enjoy most about these stories is the opportunity to create my own vision of the ancient world by sharing the visions of others, who are certainly much more creative than I.
Posted by Mark A. Keith at 9:58 AM